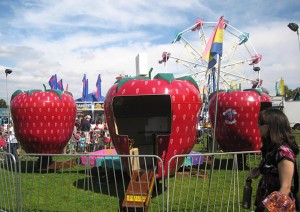 As far as cute, little community events go; the Point Grey Fiesta was a blast.

My 22 month old loved the parade, goodies and rides. The motorcycle display put on by the Vancouver Police Department’s Motorcycle Drill Team sent him over the moon. Everytime they roared by, he would sign, “more, more” furiously. Everyone around us seemed to be in a stellar mood. Even the shoe repair man across the street in his apron was cheering away. This event is full of warm fuzzies (as a friend put it, “shiny, happy people”).

The parade is fun and casual with lots of things given to the kids like candy, stickers, balloons, hats etc… The atmosphere is busy but not crowded which is good for small children.

Most unusual thing: St Helen’s church had a man dressed in monk robes carrying their flag on roller blades. He literally floated down the street.

Most counterproductive thing: Women from Curves handing out candy.

The rides and midway assembled at Trimble Park were also a lot of fun. Yes, the rides were pricey but hey, it’s once a year thing. Tickets were a buck a piece and the toddler rides were 3 tickets. For me, it was worth every penny to see Caden on his first amusement park rides. He loved the Merry-Go-Round, the Train and the Giant Strawberry that spun like a Teacup.

There were rides for bigger kids like the Octopus and Salt ‘n Pepper Shakers to name a few. Definitely something to make everyone feel woozy. 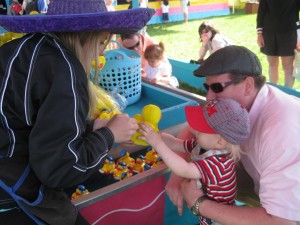 If you don’t feel like forking out the cash, you can spend your time at the playground and wading pool at the far end of the park.  There’s lots of fun to be had there for the little ones.

If you’re at Trimble park around lunch time, just know that the food is expensive and limited so bring your own picnic or grab something on 10th Avenue. There’s a Tim Horton’s about 2 blocks away.