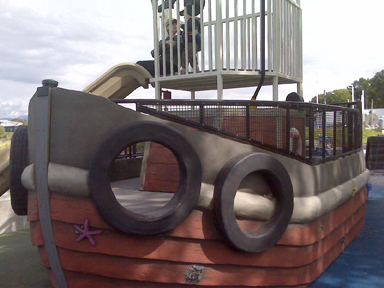 Things did not start off well on Sunday.

As we walked along the new seawall towards the Richmond Oval, I realized I’d left my beloved cup of coffee on the bumper of the car. Drat! Let it go, Andrea…breathe.

I’d never explored this part of Richmond, not even during the Olympics. Even though the seawall was unfinished (paths still gravel, construction equipment ready and waiting nearby and landscaping incomplete), the path was surprisingly neat, clean and inviting.

Overhead a variety of float planes, standard planes and helicopters made their decent into Vancouver International Airport. The constant stream of planes was a hit with Caden as was a little playground we stumbled upon.

This gem is along the seawall right beside the UBC Boathouse at 7277 River Road.  I’ve never seen play apparatus like this. It looked like a tug boat and when you got close enough to trip the sensors it made noise: seals, whales, bells, a horn, and seagulls. How cool is that?  There were 2 nifty slides plus 2 ever-important steering wheels. We liked playing here…this little tug definitely fired our imaginations.

Eventually, we continued on to the Olympic Oval, wandered around the exterior and then entered through the front doors. The lady at the desk gave us a handout so we could take a walking tour around the outside of the building. We could have taken a 45 minute walking tour of the inside of the building ($7 per person) but alas nap time was upon us.  You can explore the building yourself for free before 9:00am or after 3:00pm daily. What an amazing facility with lots of programs for kids. The fall schedule looks pretty cool (martial arts, basketball, skating, etc…).

Upon returning to the car, I found my coffee sitting on the bumper waiting for me, so I took a swig. Ahhhh….the perfect temperature…well…no, not really, but cold coffee is better than no coffee. Looks like it turned out to be a pretty good morning after all. 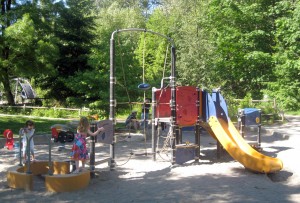 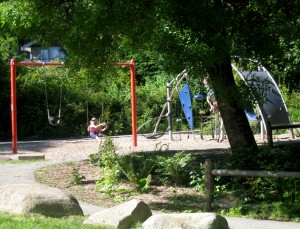 Ok…so the name isn’t going to win any prizes but the park is nifty. You’d never guess that this lovely little park with woodsy trails is just a “hop, skip and a jump” from Capilano Mall and Marine Drive in North Vancouver. The locals were friendly and our new playmate helped us make a mud-pie birthday cake with stick candles. The playground is mini and geared towards younger kids that like to climb, but is was fun.

So, if you find yourself drving around North Vancouver one day with a kid strapped in your vehicle pushing your buttons (it’s the shrieking that sends me). You can pull over, open the door and let your little one expel some of that pent up energy by running around Mosquito Creek Park.

P.S. I love these quaint little seats…they’re so civilized…this is where you can plant yourself. Hopefully with latte in hand. 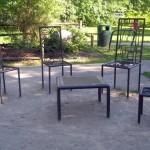 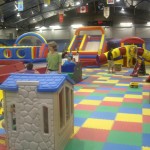 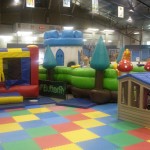 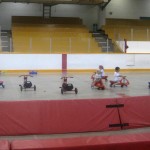 In the spring and summer months, Kerrisdale transforms their skating arena into a playground for toddlers and kids (up to 12 years old). Admission is 3 dollars for children 6 months to 2 years old. The toddler area is perfect for wobbly yet energetic tikes. There’s plenty to do and it’s safe, safe, safe. I feel comfortable letting Caden loose without fear of environmental factors like trafffic, dogs, big kids etc… He’s free to roam in this enclosed but spacious, “no shoes, socks mandatory” environment.

The odd time, I sneak in a coffee and it’s like I’ve died and gone to heaven. I can actually relax while I wander around behind Caden. There’s so much to do that he’s entertained for a full 30 – 40 minutes. He races between the slides, play houses, forts, obstacle courses, and bouncy castles (not to mention the foosball tables and air hockey table we discovered last vistit). Nothing is funnier than a 23 month old playing air hockey. I actually enjoyed our game; that is, until he got more interested in scoring on his own goal.

I highly recommend a visit to the Play Palace but you’d better hurry, the last day is September 2nd. After that, the arena will, once again, be used for hockey and skating lessons.

Thank you Play Palace for giving us some good times; for making sharing fun; for teaching us to jump with two feet and, most importantly, for giving us somewhere to play away from the the blazing sun. Sniff…sniff, we’ll miss you. We’ll also miss the vanilla ice cream cones we got next door at McDonalds (does that make me a bad Mother…I blame the teething for the ice cream…that’s my story and I’m sticking to it)